Tomball Homes and Condos for Sale

Tomball, Texas, is a small city in Harris County. This community used to be called Peck, which was the name of a railroad civil engineer. Sometime later, it was changed to honor Thomas Ball, a local congressman. Tomball has a population of over 11,500 people.

Since it possesses a small population, Tomball makes it fairly simple for you to meet others and established strong ties. The Freight Train Food Truck Festival is one place where you can make new acquaintances and get a tasty meal out of it. This October event features 30 food trucks, kids’ activities, live music, and more. The Railroad Depot is a historic must-see. It has a model railroad, a gazebo, train memorabilia, and other features. You can go on guided tours of the place on weekends. The Tomball Corn Maze offers plenty of autumn fun. Besides a five-acre area corn maze, it has games, a pumpkin patch, and concessions. Theis Attaway Nature Center is a major natural haven in town. The nature center has an observation blind where you can see birds and small mammals. Also included are a pond, walking trails, and a small amphitheater. For errands, you can go to Tomball Marketplace or Tomball Town Center. Between them, you’ll find chain operations like Kohl’s, UPS, Chili’s as well as a movie theater, a bowling alley, and other venues. Tomball offers a nice selection of schools: eight public elementary schools, five public intermediate schools, two public middle schools, two public high schools, and one private high school. For adult students, there’s one community college.

The types of homes in Tomball include apartments, single-family houses, mobile homes, and townhouses. These Tomball real estate properties have an average of two to three bedrooms, though there are homes with more or fewer rooms, too. Most residences were constructed during the years 1970-1990, making them somewhat young and well-established. You should consider making Tomball your new hometown, whether you’re raising a family or planning to retire. It has great schools, easy access to important amenities, and a small-town, family-friendly atmosphere.

If you want more information about homes for sale in Tomball, Texas, feel more than welcome to contact us.

Looking for a one story with all the bells and whistles? This is it. Gorgeous Gehan home located in Inverness Estates - Tomball address but Klein ISD. Hard to find one ...

New home in a gated community of Twelve Oaks. This home features 4 bedrooms, and office. Spacious primary bedroom with a walk in shower and soaking tub, walk in closet. K...

WOW! Welcome home to this Beauty in the highly desired area of The Woodlands Creekside Park. This Stunning home with POOL and SPA won't disappoint! It is FULL of UPGRAD...

Better than New! This Spacious Four Bedroom Home has Room for Everyone! Updates and Upgrades Everywhere! This Property Features Three Baths, one Bedroom Down and Gameroom...

Welcome home to 521 Carrell St in the heart of Tomball. This fully remodeled ranch style home is an absolute dream. Sitting on a 10K+ corner lot just minutes from downtow...

Built in 2015, this Tomball one-story home offers a patio, granite countertops, and a two-car garage. This home has been virtually staged to illustrate its potential.

Simply beautiful 1 story in memorial springs. From the moment you walk you will want to make this home yours! Totally repainted interior in a smooth neutral color and com...

Income producing property on 1.6+ acres convenient to 99 and Tomball. Seller lives in the 3 bedroom double wide mobile home which could be leased for about $1,600/month....

Text Agent Showing Request at 281-610-8577. Go and Show. Garage Door Code is 1963 This one will go fast. Totally redone with todays current styles. Amazing location an...

Come view this spectacular 5 BEDROOM (2 beds downstairs) Newmark home in a GATED SUBDIVISION! This home welcomes you with an attractive stone & brick exterior and spacio...

This 0.68 Corner lot is located in the highly desirable subdivision of Spring Creek Estates RP. This is a Gated Community. It's located close to 249 and all major ameniti...

Looking for the perfect home in the perfect place? Chances are you'll want to check here first. 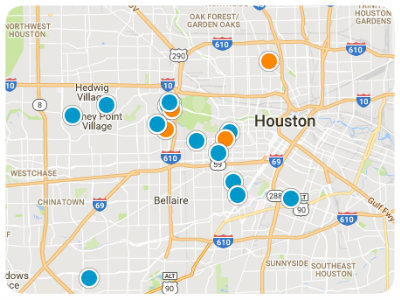